Remembering the Polish Volunteers from the Spanish Civil War

A memorial to commemorate those from Poland that fought against fascism in the Spanish Civil War took place at the Tomb of the Unknown Soldier in Warsaw on March 1st. 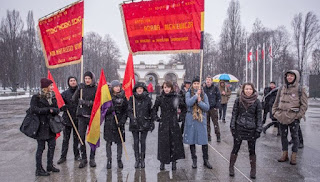 Organised in the Dąbrowski Brigade, more than 3,000 Poles volunteered to fight in Spain during the 1930s, under the banner of 'For Your Freedom and Ours'. During the 1930s, these volunteers had their Polish citizenship taken away from them. Then in the 1990s, the inscription remembering them was erased from the Tomb of the Unknown Soldier and other monuments in Warsaw. According to the Institute of National Remembrance these volunteers 'served the interests of Stalin in Spain'.

This week’s action was organised by a group of art students, led by Zuza Ziółkowska, the grand-daughter of one of the volunteers. Participants carried anti-fascist flags and banners from the Spanish civil war and laid a reef in the shape of the symbol of the International Brigade.

The action took place on the year of the 80th anniversary of the outbreak of the Spanish Civil War. It also coincided with the day in Poland that commemorates the so-called 'Disavowed Soldiers' (or 'Cursed Soldiers'), a term applied to the armed resistance movement to Communism after the Second World War. This has taken on a strong significance for the right-wing in Poland, who honour all the 'Disavowed Soldiers', including those that killed an estimated 5,000 civilians (amongst them 157 children).

At the event Ziółkowska said that those who fought in the Spanish Civil War are now Poland's 'Disavowed Soldiers'. She added that the lack of memorials to these Polish volunteers has helped to fragment historical memory in Poland and that they wish to help make history once again more pluralistic.