Polluting the Atmosphere in Poland 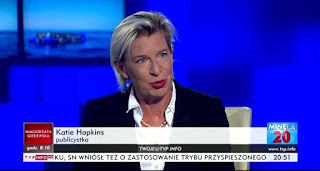 Earlier in the summer this year, it was revealed that 12,000 tonnes of plastic waste are exported from Britain to Poland each year. Millions of Polish złoty are paid to ship this toxic rubbish, which instead of being recycled is often burned. Fires smoulder on rubbish dumps on the outskirts of Polish cities, further poisoning an atmosphere that is already the most polluted in the European Union. The new ‘trash mafia’ is happy as it counts its mounting profits; and Britain can turn a blind eye to a problem that is no longer theirs.

The Polish Prime Minister has threatened to ban this trade. The burning of other people’s rubbish is not a great look for a government that prides itself on its patriotic defence of the country’s sovereignty. At the same time, however, a new toxic waste is being exported from Britain to Poland: the self-styled leaders of the far-right.

First of all it was the turn of Tommy Robinson (not his real name) who recently spent months in prison for contempt of court. He has serially been arrested for such offenses as brawling, assault, having a false passport and mortgage fraud. He is a former member of the fascist British National Party and has a history of violent, extremist activity. Robinson visited Poland last year to attend the annual Independence March, an event organised by far-right organisations  on which banners were carried with slogans supporting things such as a ‘white’ Poland and Europe and against refugees and Muslims. Robinson came to praise Poland. To laud them for defending Europe’s supposed white Christian culture and rejecting the road of multiculturalism.

And now it’s been the turn of Britain’s other far-right star: Katie Hopkins. The journalist who is currently facing bankruptcy due to libel charges and was deemed too right-wing even for the Daily Mail. The person who says that gunships should be deployed to stop migrants arriving in Europe and that she would make a bonfire out of migrant boats. This week Hopkins was hosted by Poland’s own anti-immigrant showman (PiS MP Dominik Tarczyński) and presented to the Polish public during an interview on state TV. And of course, Hopkins was there again to praise Poland for being white and Christian and basically not having many Muslims. It was a sickening site to see Hopkins receive such a warm welcome by the Polish right, in the country where the Nazis committed some of the greatest crimes in modern history. This is someone who describes people as vermin and cockroaches and demonises humans to such an extent she can compare them to a virus. This is a person who said a ‘final solution’ was needed to deal with terrorism – a phrase used by the Nazis for their plan to exterminate the Jewish people.

These troublemakers know very little about Polish history nor the current reality of the country they have visited. Poland is a nation that has benefited from open borders, as millions have moved to work throughout the European Union and beyond. Poland currently has one of the largest inward waves of migration in Europe, issuing 585,969 first temporary residence permits for non-EU citizens in 2016 (the majority from Ukraine, but also increasingly large numbers from countries such as India, Pakistan, Nepal and Bangladesh.) This is a higher number of migrants than came to Germany, the country that Hopkins and her friends like to criticise for their open migration policy. Poland is gradually changing and becoming more diverse, which is a sign of Poland’s economic growth and development.


Robinson and Hopkins now pretend to be Poland’s friends and admirers of the people and its culture. This of course is one big charade used to gain favour with a nation they hope will listen to their hate speech. Tommy Robinson has previously stated that he would like to stop all Polishmigrants coming to Britain. Katie Hopkins meanwhile has attacked the Labour Party for ‘inviting the whole of Eastern Europe to enjoy our welfare system’. Both Robinson and Hopkins are supporters of a hard Brexit from the European Union, which would negatively affect the lives of the Polish community in Britain. They have helped to fuel an atmosphere of racial hatred in the country, which has included a rise in attacks on Polish immigrants.

It’s not just Britain’s trash that is currently polluting the atmosphere in Poland. It’s time the Polish government and people stopped accepting it.
Posted by Gavin Rae at 09:54 21 comments: