'Independence March' - The Unholy Alliance of the Polish Right 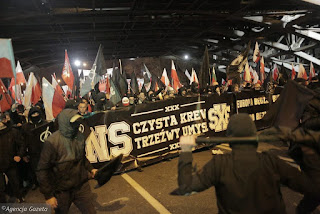 The annual Independence march (Marsz Niepodległości) took place in Warsaw on 11 November. Over 60,000 people attended, some of them masked and setting off red smoke bombs. Banners were carried with slogans supporting things such as a ‘white’ Poland and Europe and against refugees and Muslims. Some demonstrators wore the Celtic cross or the pre-war fascist symbol (the falanga). Representatives of other far-right parties in Europe attended the march, with the former leader of the English Defence League, Tommy Robinson, boasting that he ‘had an amazing time with polish patriots marching against Islam’.

The sight of such a march in the middle of Europe has reverberated around the world. Many media outlets claimed that  tens of thousands of fascists and white supremacists had marched through Warsaw. On the other hand, many attending the march have claimed that they are just patriots wanting to commemorate the date when Poland regained independence 99 years ago. They argue that the racist banners or symbols were held by a small minority of the demonstrators and that the media has deliberately misrepresented the demonstration in order to discredit Poland and its government. Whilst these claims of innocence and persecution are untrue (although the false reports that a banner calling for a ‘holocaust against Muslims’ are counterproductive) it is important to understand the true character of the Independence march and what lessons anti-fascists can learn from it.

The Independence march had originally been organised by three of Poland’s main far-right groups: All-Polish Youth (Młodzież Wszechpolska), the National-Radical Camp (Obóz Narodowo-Radykalny) and the National Rebirth of Poland (Narodowe Odrodzenie Polski). During its early years demonstrators would congregate in front of the statue of Poland’s pre-war historic figure Roman Dmowski, many demonstrators dressed in paramilitary uniforms and it was not uncommon to see participants giving the ‘hitler salute’. Anti-fascist demonstrators organised counter-demonstrations and were often successful in blocking the march from going along its designated route.

However, from 2011 a new coalition was formed to organise the demonstration. The fascist roots of the march were disguised, the uniforms put away and the fascist salutes discouraged. An alliance was formed between the far-right, groups of football hooligans and importantly the growing catholic conservative right. The demonstrations grew in size, boosted by the growth of the Law and Justice Party (PiS) as the main opposition party. Although the demonstrations often ended with hooliganism and vandalism, the far-right had managed to hegemonise the right and bring different sections of the conservative and patriotic right under its banner. From 2014 the attempt by anti-fascists to block the march was abandoned – simply because it was too weak to do so and the far-right had managed to convince many that this was no longer a fascist march. This new alliance has been further strengthened since PiS formed a government in 2015.

Since coming into office PiS has systematically promoted an ideology that includes Islamophobia and anti-refugee sentiments, whilst being silent and uncritical of the activities of the far-right. This has helped build a hostile atmosphere towards immigrants and refugees amongst a section of society, based around the idea that Poland is one of the last bastions defending a Christian and white Europe. PiS treats the far-right as do the conservative government in Hungary or Trump in the USA. This means that they are the de-facto radical wing of the government. Just as Trump refuses to condemn the far-right demonstration in Charlottesville, so the Polish government actually praises the Independence march in Warsaw in which many of its supporters took part.

Such developments should act as a stark warning to the anti-fascist movement and left in the rest of Europe. Countries such as Poland or Hungary are not exceptional cases, nor are they societies that are somehow predisposed towards racism or fascism. They are countries that have undergone far deeper and more stringent processes of neo-liberal economic reform and social dislocation over the past couple of decades. Furthermore their mainstream left-wing parties essentially collapsed over 15 years ago – a process that has recently been replicated to some degree in many western European countries. Combined with the disillusionment with the left existent in most ‘post-Communist’ countries, the grounds for the rise of fascist ideology is ripe. The equating of fascism and communism that was propagated even by liberals and parts of the left throughout the transition is now being used by the right as a new means for discrediting the left and promoting the traditions of fascism. It is not true that 60,000 fascists and white supremacists marched through Warsaw last Saturday – as many international journalists claimed. The largest far-right party in Poland is estimated to number no more than 5,000 members. However, bolstered by the acceptance and support of the government, the far-right have managed to build support for their racist and hateful ideology far beyond their own actual base. It is this alliance that has to be broken in countries like Poland, Hungary and the USA and prevented from forming in other states. 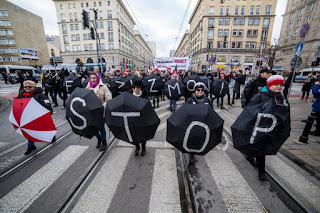 On the same day as the Independence march, a few thousand anti-fascists organised an alternative demonstration in Warsaw. This brought together anti-fascists, the left, LGBT organisations, trade unionists and individuals who are simply disgusted at the sight of fascists walking through a city that had been razed to the ground by the Nazis. Next year is the 100 anniversary of the date when Poland regained independence. The far-right will see this as an opportunity to organise an even larger Independence day march. The challenge for those opposed to racism and fascism is to find a way of uniting and organising a progressive alternative to this and showing that fascism and racism are unacceptable in Poland and that they once again become discredited and marginalised.
Posted by Gavin Rae at 09:49 221 comments: