First they Came for the Communists..... 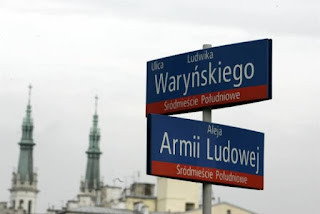 where there are hardly any Communists. They have begun a process of decommunisation, where there is no communism. The aim of the government is to ideologically push the country further to the right and open the way for greater attacks on the wider left.

A regional court has sentenced 4 activists from the Communist Party of Poland for allegedly supporting a 'totalitarian' regime and propagating communist ideology in their newspaper and website. They have been sentenced to 9 months of limited freedom, with obligatory community work and a fine.

They have been accused of breaching an article in the penal court that states: 'Whoever publicly promotes a fascist or other totalitarian system or state or incites hatred based on national, ethnic, race or religious differences or for reason of lack of any religious denomination shall be subject to a fine, the penalty of restriction of liberty or the penalty of deprivation of liberty for up to 2 years'. Previous attempts to add a ban on Communist symbols were rejected by the Constitutional Court in 2011 after protests in Poland and abroad that this would violate human rights.

The case against activists frm the KPP had previously been brought to court in 2013, by the PiS MP Bartosz Kownacki. Howeverf the Prosecutor's Office refused to initiate the proceedings. This changed after the election of PiS and on 31 December 2015 the Regional Prosecutor's Office in Katowice issued a case in the Regional Court in Dábrowa Górnicza. The act stated that the activists were publicly promoting a totalitarian system by publishing articles ' directly related with the communist system and Marxism-Leninism, which in the context of historical experience is contradictory with democratic values'

This potentially means that anyone now using the work of Marx (or other Marxist writers and ideas) could be prosecuted under the law. This is a direct attack on democracy and human rights and could be used to repress other left-wing activists, academics and groups.

Simultaneously, the PiS government has recently passed in parliament a “decommunisation” bill, whose stated aim is to remove any remaining Communist symbols from public spaces. However, there are no Communist monuments in Poland anymore, nor streets or squares named after figures such as Marx or Lenin. The bill rather aims to remove from the public sphere any reference to the Polish People's Republic (PRL) and to the country's socialist and anti-fascist history.

The Institute of National Remembrance (IPN) has published a list of street names that should be removed. These include the names of the 19th Century socialists Ludwik Waryński and Stefan Okrzeja who died fighting the Tsarist regime. They are also threatening to change the name of the street in Warsaw named after the Dąbrowski Battalion, which comprised of Polish volunteers in the Spanish Civil War. In the city of Gdańsk some right-wing politicians want to rename such a street after Margaret Thatcher. Such name changes are widely opposed by the residents of these streets, although their opinions are not being taken into account.

A further element of this 'anti-communist' drive, is to remove monuments commemorating the role that the Red Army played in defeating Fascism (600,000 Red Army soldiers died on Polish soil). In the city of Rzeszów (which was liberated by the Red Army) a decision has already been made to remove such a monument. However, opinion polls show that around 80-90% of the city's residents do not want the monument removed. 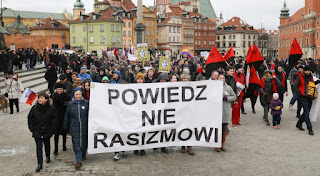 A 40 year old Egyptian man is in a critical state in hospital after undergoing an attack by a group of nationalists in Gdańsk.

The attack took place on Sunday afternoon as the man returned home from a party of Egyptians. The attackers beat him until he lost his consciousness. As yet none of the attackers have been caught.

This recent attack is an example of a wave of racist attacks that have taken place in recent months, as an atmosphere of nationalism and hostility to immigrants has risen.

- In September a group of 13 year olds in Świnoujście beat their colleague because he was black. They admitted that they had been inspired by the slogans of an anti-immigrant demonstration that had been held in the city a few days earlier.

- A few weeks later in Poznań a Syrian was brutally attacked by a young nationalist, ending up in hospital with serious injuries. In the same city a Chilean dancer was recently attacked being told to 'f**k of out of the country'.

- In Kraków a bouncer attacked a British Sikh man, as he did not like his turban.

- In Warsaw a few weeks ago a group attacked a Pakistani man in a park, resulting in him going to hospital with serious injuries.

- Recently in the city of Rzeszów a Portuguese exchange student was beaten by a professional soldier.

(Information in this article taken from the website Strajk.eu )
Posted by Gavin Rae at 05:16 7 comments:

As in the Case of Refugees, Young People are the Most Conservative on Abortion

One of the most  disturbing recent developments in Polish politics, is the growth of conservative attitudes amongst Polish youth.

A similar trend is observable on the issue of abortion. As can be seen in the graph below, those that  support tightening the current abortion law (that includes those that are in favour of a total ban) are in the age group 18-24. They display a far greater hostility towards abortion than any other age group, with the most liberal opinions held by those aged between 45-54 and 55-64. A common perception throughout the transition from Communism, was that society would become more socially liberal as the market economy and democratic political system developed. However, we can now see that those who lived during Communism actually tend to be more liberal than those who have been born in under the current system.