The Left Should Unite to Stop Kukiz 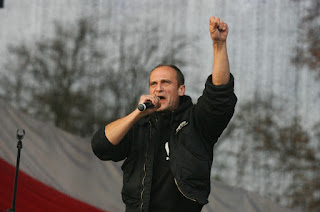 ‘At a certain point in their historical lives, social classes become detached from their traditional parties. In other words, the traditional parties in that particular organizational form, with the particular men who constitute, represent and lead them are no longer recognized by their class (or fraction of a class) as its expression. When such crises occur, the immediate situation becomes delicate and dangerous, because the field is open for violent solutions, for the activities of unknown forces, represented by charismatic “men of destiny”.’
(Antonio Gramsci – Prison Notebooks)

With just three months until the next parliamentary elections, Polish politics is in a state of flux. The surprise defeat of Bronisław Komorowski, in May’s Presidential elections, followed by the resignation of a number of government ministers, have left the ruling Citizens’ Platform (PO) government in a state of crisis. The Law and Justice Party (PiS) has seized the initiative, by attempting to repeat its successful strategy from the Presidential elections of focusing on living standards, keeping its leader Jarsosław Kaczyński in the background and putting forward a younger less controversial candidate for Prime Minister: Beata Szydło. And then we have Kukiz….

According to the latest opinion polls only three parties/movements will enter parliament in October. With PO now trailing PiS by at least 10% in most opinion polls, the yet to be officially established Kukiz Movement (created by the rock star Paweł Kukiz) is currently maintaining its score in the Presidential elections of around 20%. Therefore, the Kukiz movement has a chance of assuming a key political position after the next elections and entering government with either PiS or PO.

The Kukiz Movement potentially represents one of the most dangerous and regressive developments to have appeared in Polish politics over the past couple of decades. This is because it simultaneously appeals to the dissatisfactions of the disadvantaged and frustrated, using extreme anti-systemic rhetoric, whilst representing the interests of the establishment and the privileged.

Paweł Kukiz is the archetypal ‘charismatic leader’. He is a rock-star who portrays himself as a ‘non politician’ and therefore someone who can honestly represent the people and clean up politics. He repeats the long-held opinion of the conservative right that the problems of the Polish economy and politics are due to a corrupt elite, derived from the previous system, that has usurped and retained power. He appeals to the far-right through nationalism, support for the traditional family and conservative catholic values. He had previously been a member of the organising committee of the nationalist Independence March in Warsaw and was active in protesting against the Europride march when it was held in the Polish capital city. He has a base of support within the far-right National Movement and has offered some of the most right-wing politicians in Poland, such as Janusz Korwin-Mikke and Grzegorz Braun, the opportunity to stand as candidates in the parliamentary elections on the Kukiz Movement list. At times his rhetoric is extreme and devisive, such as when he said that the proposal from the EU that Poland should accept 1,000 refugess from Africa (in a country where around 1.5m people have emigrated during the past decade) is an attempt to weaken and divide the Polish nation.

But then there is the other side of Kukiz. Despite presenting himself as the antithesis of the ruling elite and PO government, Kukiz comes from this very same milieu. In 2005 he was an honorary member of the committee supporting the Presidential campaign of Donald Tusk; in 2006 he supported the PO candidate Hanna Gronkiewicz-Waltz for Warsaw Mayor and in 2007 he backed PO in the parliamentary elections. Also, despite his rhetoric, the Kukiz Movement has strong support from those representing the interests of big capital and finance in Poland. For example, Kukiz is presently being supported by Cezary Każmierczak, President of the Union of Businesses and Employers; Andzej Sadowski, President of the neo-liberal think tank the AdamSmith Centre and Robert Gwiadzowski, President of the Warsaw Enterprise Institute. These people embody the most extreme neo-liberal opinions in Poland and support Kukiz as someone who will represent their views in parliament.

Yet for now all of this is being kept in the background. Kukiz has announced that his movement does not have a political programme, as these are only for political parties that cheat (sic). Instead Kukiz has focused on one issue, which he claims will help to overthrow the establishment: the introduction of a first-past-the-post (FPTP) electoral system, similar to that existent in Britain or the USA. This was his one campaigning point in the Presidential elections and his success in the first round led to Komorowski drawing up a bill, in the run up to the second round, that a referendum on this issue will be held in September, including a question on the continuation of the state funding of political parties. This was considered by many as being unconstitutional and it certainly goes against good democratic practice for a President to take such an important decision when campaigning in an election.

The issue of electoral reform is a complicated one, as there are advantages and disadvantages of each system, none of which are perfect (I have written previously about this issue here). The question to be asked now is who would gain from FPTP in Poland?

The answers to this question is clear. This would benefit the established parties (PO and PiS) which have dominated politics for over the past decade and give Kukiz the opportunity to consolidate his own political movement, if it enters as the third party this autumn. It would make it virtually impossible for new political parties and movements to emerge from below and challenge the status quo. It would mean that only those parties that have strong private financial backing would have a chance of seriously competing on the political scene and would thus bring politics and business closer together.

Even if the referendum in September is not successful (it is probable the turnout will be too low or even that the new President Andrzej Duda will block the referendum), there is a chance that new constitutional changes will be made (including to the electoral law) after the parliamentary elections. This would most likely be a condition set by the Kukiz Movement before entering any coalition government. The Kukiz Movement will attempt to push a future administration further to the right on almost every issue of importance, whether that government includes either PiS or PO.

The position of PO, as the leading hegemonic party in Poland, is coming to an end. The more consensual policies of PO, situated within the conservative wing of mainstream European politics, have run their course. Sections of the elite are now looking to a movement that appeals to some of the most reactionary sentiments and emotions of those frustrated with their standards of living. This movement will serve the needs of the elite, support further neo-liberal reform under the guise of cleansing the economy of political interference and seek to structure the party political system so that it is dominated by the parties of conservative right.

The electoral base of Kukiz is diverse, with a range of people who wanted to register a protest vote supporting him in the Presidential elections. However, it potentially brings together main two social groups: middle earners (including entrepreneurs and small business owners) and the socially excluded (including low earners). Over 30% of the Kukiz voters are middle income earners (earning at least 2,000 złoty per month), whilst one-quarter earned only 650-1,000 złoty per month. The opinions of his supporters are diverse, but they oppose the current system and believe that electoral reform is a way to change it. Both of these social groups do not feel that they have benefited from the country’s economic growth, that a corrupt elite is to blame for this and they are attracted by the simple solutions offered by the Kukiz Movement.

An alliance of such social groups in the service of large capital and the establishment is not something new. The growth of fascism before the war was based upon this very social alliance. In Europe today we see  such movements of the far-right such as the Jobbik Party in Hungary, the pro-austerity boot boys of Golden Dawn in Greece and the oligarch’s paramilitary Right-Sector in Ukraine. The Kukiz Movement as yet does not have a clearly defined political ideology and it is too early to say in what direction it will develop, or whether indeed it will be able to crystallise as a lasting political force at all. However, the warning signs are there. It could potentially deepen its roots within the organisations of the far-right and football hooligan groups. Furthermore, over the past year there has been a huge growth in volunteer paramilitary groups, whose membership has soared in the atmosphere of war that has developed in the wake of the crisis in Ukraine. There are an estimated 120 such groups in Poland, with a membership of around 10,000 members. Such groups could also be attracted to the politics of the Kukiz Movement and be strengthened and politicised by the formation of a new right-wing government in Poland.

It is for these reasons that the left has to understand the urgency of halting the rise of Kukiz. This is the biggest threat facing progressives in Poland today. The prospect of a new right-wing administration being formed with the Kukiz Movement, during a time of the potential break-up of the Eurozone and further conflict in Ukraine, should concentrate the minds of the left and set its priorities for the forthcoming elections. The Kukiz Movement is drawing on social frustrations at a time when the left is weaker and more divided than at any time over the past quarter of a century. The forthcoming elections are therefore about the future survival of the left and preventing the growth a new far-right force in Polish politics.