Poland Must Rediscover its Anti-Fascist Voice

Below I reproduce an article I have had published on the openDemocracy site about Poland and the Ukrainian far-right. 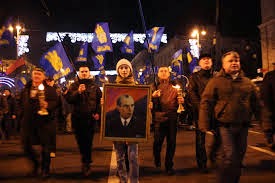 Ternopol Mayor Sergei Nadal was asked why Svoboda supports the recognition of descendants of former members of the Ukrainian 14th Division of the Waffen SS as national heroes. "These Ukrainian heroes must be honoured irrespective of what has been written about them in the history books of those peoples who were once our enemies," Nadal answered.

World War Two left too many stories of human misery. Amongst them was the ethnic cleansing carried out in Nazi occupied Poland by the Ukrainian Insurgent Army (UPA). This reached its peak in 1943, when the UPA Commander ordered the liquidation of the male population, ending in the murder of around 100,000 Poles, the majority of whom were actually women and children.
These killings were carried out by the faction of UPA under the leadership of the Ukrainian nationalist leader Stepan Bandera. Fighting alongside the German Nazis, who promised them a post-war independent Ukraine, their aim was to purge their future state of all non-Ukrainians. Thankfully, the Nazis and their allies were ultimately defeated and UPA was never able to realise its dream of an ethnically pure Ukraine within a Nazi controlled Europe.    Read More here......


Below I reproduce a statement released by the III Congress of Left Women held in Warsaw this weekend.  (Original version here)

As women of the left we stand in solidarity with all women in the world, especially those living in areas of chaos and political tension.

We oppose policies that are leading to the escalation of conflict and the outbreak of war. We reject the atmosphere of war-fever being created by a section of opinion-makers in Poland. We do not want to send our children to any war that can and should be avoided.

We appeal to all parties of the dispute to find a political solution that respects the rights of residents in the Crimea and abides by international law. So far, the Crimean crisis has caused no casualties, and this should remain the case.

We reject the policy of "male war games". The excitement caused by inspecting troops, visiting bases or saluting allied aircrafts is alien to us.  We believe that real political leadership does not need to be supported by a background of tanks and guns.

The atmosphere of war intensifies, rather than nullifies, the everyday problems of Poles. These include a lack of work, low wages, poor access to nurseries, pre-schools and medical treatment.  The government should be dealing with these problems rather than increasing war threats.

The Ukrainian People Must Be Free to Determine Their Own Future 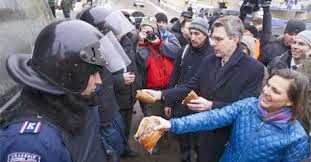 The Polish government and opposition are speaking with one voice. Ukrainian sovereignty must be defended, its territorial unity preserved and western governments should do all they can to support the new government in Kiev. The focus of their concern has been on Crimea, and on the manoeuvres of Russian soldiers (official or not) in the region. Whilst these concerns are legitimate, by focusing only on this one aspect of the crisis, other violations made against Ukraine’s sovereignty have tended to be ignored and the wider issue of the self-determination of the Ukrainian people overlooked.

The Russian incursions in Crimea are the culmination of a series of violations made against Ukrainian sovereignty by foreign governments that have destabilised the country and pushed it to the brink of war.  However, the statement made by the US Secretary of State John Kerry that a country cannot invade another on false pretences cannot be taken seriously. This is from someone who represents a country that has made a habit of engaging in illegal wars, funding armed opposition groups and using drones to drop bombs on other countries. In Poland it even violated international law by interrogating terrorist suspects in secret prisons. It is an absurdity to present the actions of Russia in Crimea as being worse than the unlawful invasion of Iraq, which has caused around one million deaths.

The Euromaidan demonstrations against Yanukovych’s government were a genuine explosion of social discontent against a corrupt regime that had proved itself incapable of solving the country’s growing economic crisis. However, these demonstrations were directly encouraged and influenced by foreign politicians and governments. Those politicians from the USA and the EU (including from Poland) that went to the Euromaidan demonstrations displayed a gross sense of irresponsibility and were willing to overlook the fact that these demonstrations were becoming more violent and that representatives of the far-right were playing an increasingly central role.  One wonders how liberal opinion in Poland would react if leading politicians were to appear on the Independence Day (Marsz Niepodległości) march in Warsaw and openly support the violent demonstration.

The extent of western interference in Ukraine was revealed in the now infamous ‘Fuck the EU’ phone conversation held between Victoria Nuland (Assistant Secretary of State for European and Eurasian Affairs) and the US ambassador in Ukraine. It was shown how the US was directly attempting to influence the shape of the new Ukrainian government, pinpointing Yatseniuk as their favoured appointment as Prime Minister (a wish which of course came true). In a speech in December Nuland revealed how the US had spent $5bln to "ensure a secure and prosperous and democratic Ukraine". Some of this money had been used in supporting the ‘Orange Revolution’ in 2004, where the Bush administration spent $65 million giving ‘democracy training’ to political leaders, helping their favoured oligarchs to assume power.

Despite the West’s claims of neutrality it has clear military and economic interests in Ukraine.  This includes the desire to see Nato expand into Ukraine, up to and including the stationing of a Nato fleet in the Crimea. EU and Nato membership have become synonymous, and the West has backed politicians (such as Tymoszenko) who have supported this aim. This goes against the democratic will of the Ukrainian population, where a majority has a negative attitude towards NATO and opposes Ukraine joining it.

The West, along with Russia, also has its own specific economic interests in the country. Ukraine is an important gas transit network, standing between Russia and its consumers in the Eurasia region. Russia supplies more than half of the country’s gas, but the Ukrainian government has recently signed a $10bln shale gas deal with the US energy giant Chevron.  The West has long pushed economic reforms that have been detrimental to Ukraine’s development. The implementation of the of shock-therapy reforms in Ukraine in the early 1990s resulted in its GDP falling from $77.5 trillion in 1990 to$50.2 trillion in 1997, with the life expectancy of males declining by 5 yearsover the same period. This was connected to a fire-sale of the country’s state assets, that created the corrupt oligarchical capitalism that survives to this day.

The rejected association agreement offered by the EU to Ukraine, which helped to spark the Euromaidan demonstrations, was packaged alongside a series of IMF structural reforms that would have been particularly harmful to the industrial regions in the east of the country. As Kiev breaks further away from Moscow, so it becomes more dependent upon the West that will insist on economic austerity in return for its (insufficient) credits. This would make an uncompetitive Ukrainian economy reliant upon western imports and lead to the closure of many of its industries in the east. In order for Ukraine to prosper it needs to have sound economic relations to both its east and west and not forced upon a track of deindustrialisation and import dependency.

Dissatisfaction with corrupt oligarchical capitalism is felt across Ukraine. However, economic austerity and extreme right-wing nationalism are not a basis for national unity. The most radical right-wing elements (around Svoboda and the Right-Sector) could not win their demands through democratic elections, which is why they rejected the compromise solution made between the government,  opposition leaders and the Foreign Ministers of France, Germany and Poland. The subsequent failure of the opposition and these governments to remain committed to this agreement has opened up an unprecedented situation in post-war Europe. An unelected government has been appointed, with the support of the EU, within which many leading positions are filled by members of fascist parties. Surely this must be a matter of grave concern for any progressive in Europe today.

Yatseniuk has stated that it is not possible for his government to be corrupted because it has no chance of being re-elected. And it is clear why. This new coalition government of parties of oligarchs and the far-right is preparing to implement austerity policies that will result in a further impoverishment of Ukrainian society. As has been the case in many Southern European countries over the past few years, democratic practices need to be suspended in order to carry through such economic programmes. Leszek Miller was correct to point out that the implementation of new austerity policies in Ukraine would result in further social discontent and disorder  (compare this to Palikot’s proposal for Nato intervention and shock-therapyreforms!) The consequences of such a reform programme could be disastrous in a situation where the left is weak; the far-right emboldened by its successes at the Maidan and regional and national divisions have widened. All those proclaiming their support for the sovereignty and territorial unity of Ukraine should oppose this new imposition of neo-liberalism in the country.

In this rapidly unfolding situation it is imperative that the Ukrainian people regain their right to determine their own future free from outside interference. This goes beyond the immediate crisis in Crimea, and the abstention of military activities in the region, and could include such things as the reaffirmation of the country’s military neutrality; respect for the rights of national minorities, including minority languages;  the creation of a true national unity government without the parties of the far-right;  the abstention from introducing any programme of economic reform until there is a democratically elected government and president;   the cancelling of Ukraine’s foreign debt in order for it to regain its economic sovereignty (as was the case for Poland in the early 1990s) and the granting of the right of regions to hold referendums on their status within Ukraine.

Ukraine has become an arena for the power games of greater external powers. The only peaceful way out of this situation is for these countries to hand back the right of self-determination to the Ukrainian people.