1/8 of full-time emloyees on minimum wage

According to the most recent assessments of the Polish Statistics Agency 1/8 of all those employed on a full-time contract in Poland earn the minimum wage. 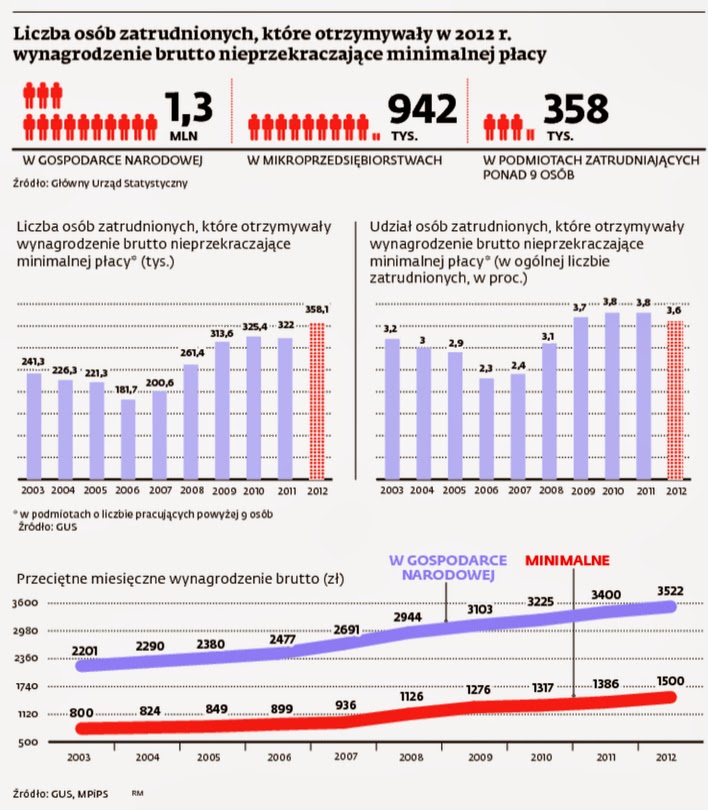 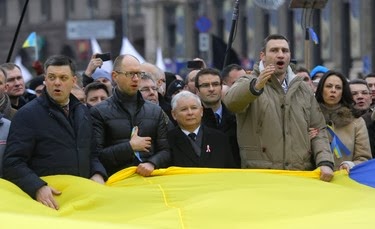 The recent protests in Ukraine are another example of the social and political instability created by the global economic crisis. Ukraine has just undergone its third serious economic shock in little over two decades; its economy is depressed and it faces a crisis of credit default and monetary deflation. The present corrupt oligarchical administration, that protects the interests of a wealthy elite, has been unable to offer the Ukrainian population a way out of this crisis.

The recent mass protests in Ukraine, that followed President Yanukovych’s refusal to sign an association agreement with the EU, has been explained using a simple and one-sided narrative. Yanukovych’s government, bowing to pressure from Russia, is preventing the country from joining the EU and thus stopping it from entering the club of wealthy and democratic nations that would help guarantee its economic and political development. A further suffix is added that the EU itself is not grasping this opportunity and is thus preventing Ukraine from exiting the orbit of Russian domination.

This sentiment has been expressed in an open letter recently signed by many intellectuals, which was partly instigated by Krytyka Polityczna’s Sławomir Sierakowski. This letter states that the Euromaidan protests represent European values at its best and supports the protestors’ quest to overthrow the government in Ukraine. As a solution it proposes the creation of a new European Marshall like plan for Ukraine, to help ensure the country’s economic and political transition.

Sierakowski wrote an article in The Guardian newspaper on the same day that this letter was published.  He repeats the same idealised version of events and argues that the Ukrainians are fighting not just for themselves but for the whole European project. The protests are presented as Ukrainian civil society freeing itself from the yoke of Russian domination. He argues that this would result in Russia being the last European country to face up to the loss of its empire. The dichotomy presented is therefore a straightforward one: Russia is autocratic and imperial, whilst the EU is democratic and plural; and therefore should do all it can to help Ukraine follow its own previously trodden path towards freedom and prosperity.

In order to go along with this version of events one has to accept a reading of history  – not far removed from Fukuyama’s ill-fated thesis of the ‘end of history’ – that contradicts the actual reality of the past couple of decades. One side of this argument does have some worth. Russia does have its own economic interests in Ukraine, it does attempt to influence the country’s political and economic life and it is itself far away from being a model of a perfect democratic system that consistently respects human rights. However, accepting this fact does not mean that the EU and the West stand as its ideal opposite.

Have the experiences of just the last decade not left any traces in the collective consciousness of these intellectuals? Do the military interventions in the Middle East and Africa (many ongoing) not provide some evidence of the continual imperial ambitions of the West? And what about the imposition of economic austerity, which has often by-passed nationally elected governments, placing the burden of the financial crisis on working people and the poor? Perhaps when we express disgust at police violence in Ukraine we should remember the brutality faced by those opposing neo-liberalism and austerity in countries like Greece. In fact, the new anti-protest laws introduced by Yanukowich are very similar to the ones recently passed in Spain. There is of course much to admire in the EU, but its own house is far from in perfect order.

This idealised vision of the West and the EU results in an overestimation of its ability or desire to provide the necessary funds that would allow Ukraine to be incorporated competitively into the EU. Poland may have in recent years been the most fortunate beneficiary of EU funds (that have indeed helped it to grow through instigating public investments) but this is an exception rather than the rule. The EU budget is less than 1% of GDP and for the first time in its history the forthcoming budget will be lower than its previous one. National and European elites are promoting further policies of austerity as a way out of the crisis, that essentially amount to an economic redistribution to the richest echelons of society. The slogan of a new ‘Marshall Plan’ is an appealing one, but it is devoid of any grounding in reality and amounts to waving empty slogans in the air.

The next misunderstanding concerns the belief that that the EU has an objective disinterested stance towards Ukraine. The package proposed to Ukraine by the EU was entwined with IMF structural adjustment policies. Not only did it offer just €1bn in funds but it was designed to bring Ukraine into an uneven and dependent relationship with a richer economic bloc. The association agreement was based primarily upon the creation of a Deep and Comprehensive Free Trade Area (DCFTA), where tariffs and trade barriers would be removed to the benefit of the far stronger economies to its west. Furthermore, there was only very vague mention of the future possibility of lifting visas and zero reference to Ukraine’s future membership of the EU. It is worth noting that the $15bn bailout loan and reduced gas prices that Yanukovych eventually signed with Russia, came with none of the preconditions proposed by the EU.

The EU’s proposal was totally unacceptable to the people in the southern and eastern areas of Ukraine (where much of the industry is based and Russian is spoken as the first language). Signing such an agreement would have resulted in them having to break economic ties with Russia, being thrust into a free economic zone with the EU; undergoing a new series of structural reforms and facing increased energy bills.  This unfortunately is the hard reality of the situation; and no warm words about European ideals or quotes by Habermas and Derrida can alter it.

The experience of economic hardship caused by the economic policies promoted from the West is not an abstract issue in countries like Ukraine, where the average standard of living is still well below what it had been at the end of Communism. Following the collapse of the USSR in 1991, GDP per-capita stood at over $8,500, but by 1998 this had slumped to around $5,500. This economic collapse resulted in the coming to power of a new oligarchical political elite (as it did in Russia) that helped instigate a limited economic recovery and improvement in living standards through providing some protections of its domestic economy.  For a decade from 1998 GDP per capita grew steadily, exceeding $6,700 by 2008. However, following the global economic crisis, this growth stalled and living standards began to once again decline.

This new economic uncertainty has further exposed the cronyism and inefficiency of the present government. The Euromaidan protests were sparked by anger towards the ruling administration and the wish for Ukraine to become a prosperous and truly democratic country. This was combined (particularly amongst the young in the west of the country) with an idealised vision of the EU and a wish to be able to freely leave Ukraine and live and work inside the EU. However, this is not a universally held view and the Euromaidan protestors have certainly not spoken as the unified voice of Ukrainian society. For whilst support for Euromaidan has been strong in the west of the country, the majority of those in the east and the south have opposed the protests.

In many ways the Euromaidan demonstrations were mass spontaneous protests, channelling the anger of thousands of people and involving impressive self-organisation and political expression. However, a political void exists (particularly as those that led the orange ‘revolution’ have since discredited themselves) that to some degree has been filled by nationalists and the far-right. The main party of the far-right is Svoboda, a party that despite its cosmetic rebranding cooperates with other neo-fascist parties in Europe. Its leader, Oleh Tiahnybok, is known for his outspoken anti-Semitism and fervent Ukrainian nationalism. Svoboda played a central role in many of the most violent confrontations at Euromaidan and far-right demonstrators attacked a group of left-wing students who sought to raise issues of economic and genderequality.

On January 1st Svoboda organised a torchlight march to celebrate the 105th anniversaryof the birth of Stepan Bandera, the war-time leader of the Organisation of Ukrainian Nationalists, who collaborated with the Nazis and were responsible for the genocidal murder of tens of thousands of Poles during World War Two. The sight of western political leaders, like John McCain, meeting the leader of Svoboda is bad enough. However, is there a more distasteful sight than that of Polish ‘patriotic’ politicians such as Jarosław Kaczynski standing onthe same platform as Tiahnybok, surrounded by the flags of the Ukrainian Insurgent Army (UPA)?

For Ukraine to become a strong independent nation it needs to unified, which is no easy task in a country that is so economically and culturally divided along geographical lines. These divisions are being accentuated by the geo-political games of self-interest being played to its west as well as its east. Furthermore, these divisions and political uncertainty are being exploited by political forces inside Ukraine, that hold opinions far removed from the ‘European ideals’ being promoted by intellectuals in the West.  Whilst from the outside we can hope for progressive change, it does a disservice to the people of Ukraine to paint a one-sided and idealised version of recent events, whilst offering external solutions that are not available.
Posted by Gavin Rae at 03:35 No comments: