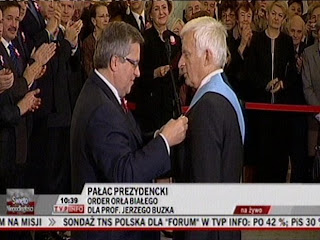 It now seems that the highest awards of the state in Poland are being given to those who inflicted the most damage on the country and then suffered the greatest political defeats.

After receiving the Order of the White Eagle at the end of last year, Jerzy Buzek has now been appointed as a member of the prestigious Chapter of the Order of the White Eagle by President Bronisław Komorowski. This may seem just reward for someone who has served as both Polish Prime Minister and as the President of the European Union Parliament. However, the right-wing coalition government that he led from 1997 to 2001 can be considered as the worst government in Poland’s recent history and one from which the country is still trying to recover.

In the midst of the present political amnesia it is worth reminding ourselves of these times. During the term of the previous Democratic Left Alliance (SLD) government (1993-97), GDP growth had averaged nearly 6% and unemployment fell from 16.4% to 10.3%. The government moved away from the previous shock-therapy reforms, strengthened the state sector and brought the budget deficit down to 1.26%, with public debt shrinking from 86% to 43% of GDP. This administration was far from perfect, but its economic record was impressive and the SLD was actually able to increase its share of the vote at the 2001 elections.

All this good work was undone by the Solidarity Electoral Alliance (AWS)/Freedom Union (UW) coalition government. Although Buzek’s appointment as Prime Minister was unexpected, he had helped to write the AWS’s economic policy and was strongly supported by UW as someone who would be receptive to its liberal economic dogmas.

And so it proved. Economic policy was handed over to the new Finance Minister, Leszek Balcerowicz, who embarked on his ill-fated ‘Second Balcerowicz Plan’ that promised GDP growth of 7% and the virtual elimination of unemployment. The reality was the absolute reverse. Economic growth grinded to a halt, expanding by barely 1% in 2001. Unemployment soared, rising from 10.3% in 1997 to nearly 18% in 2001. This economic slowdown resulted in a quadrupling of the government’s deficit, leading to a budget crisis that eventually brought down Buzek’s government.

The government also instigated a new wave of privatisations, reducing the state’s share in the economy from over 50% in 1997 to below 45% in 2000. This included the fire-sale of many of the country’s most prized assets to foreign buyers, with private foreign ownership between 1997 and 2001 rising from 20% to 70% in banking and from 15% to 35% in the industrial sector. Facing a rising trade-deficit (partly due to the destruction of the country’s own productive base) the government responded by ‘cooling down’ the economy and suppressing domestic demand, that further suppressed living standards.

The other damaging policies of the government were the ‘four reforms’ that it introduced in pensions, health care, education and local government. The first three of these reforms began the liberalisation and privatisation of the country’s most essential public services upon which the vast majority of society rely. The health service was fragmented, funding reduced and opened up to private enterprises. Education was decentralised and geared towards the needs of the market. Pensions became linked to individual contributions and a compulsory private pillar introduced that has served the stock markets rather than pensioners. The present government’s attempts to reverse these unworkable pension reforms is a lasting legacy of Buzek’s administration.

The political effect of Buzek’s government’s failed economic policies was a political collapse of almost unprecedented proportions. By 2001 74% of society assessed Buzek’s government negatively and just 12% positively. At the 2001 elections the AWS and UW were not just defeated but failed to even enter parliament and then completely disappeared as political formations. Unfortunately, however, many of those who participated in the government were able to re-launch their political careers.

After undergoing a dignified period of abstention from public life, Buzek won a European parliamentary seat as a Citizens’ Platform (PO) candidate in 2004 and was then rewarded with the post of President of the European Parliament in 2009. At the same time, remnants of the AWS and UW were able to reform themselves into the new political parties of the right that have dominated politics over the past decade: PO and the Law and Justice Party (PiS). Many leading members of both PO and PiS participated in Buzek’s government (including Komorowski who served as a Minister) and therefore bear some responsibility for its actions. It is a failure of Poland’s political system and of the left that it has allowed those who wrought such damage on the country to continue to dominate politics. That Buzek can be given one of the country’s highest honours is an insult to the millions who have suffered as a consequence of his governments irresponsible actions.
Posted by Gavin Rae at 08:47 1 comment:

The False Promise of a New Left

I have recently written an article as part of a series  on the Polish left that is being published on the openDemocracy site. My article is partly in response to one written by the Palikot Movement MP Anna Grodzka, and argues that the Palikot Movement does not offer a viable alternative for the left

It is correct to begin an analysis of the Polish left with a critique of the Democratic Left Alliance (SLD) government from 2001 to 2005. Since this time, the left has been a minority force in Polish politics, a politics now dominated by two parties from the right. However, rather than Grodzka’s party, Palikot’s Movement (RP), offering a viable alternative to the SLD, RP tends to repeat the previous mistakes of the left by placing itself within a liberal economic framework, and thereby restricting its potential growth.


The rise and decline of the SLD

The 2001 parliamentary elections marked the high-point for the SLD and the project of creating a social democratic party out of the remains of the formerly ruling Communist party. Despite (or perhaps because of) its associations with this previous regime, the SLD was able to rapidly hegemonise the left of the Polish political scene and by 1995 it held both presidential and parliamentary power. Although it lost the 1997 elections, it still increased its share of the vote and was well situated to take advantage of the disastrous right-wing coalition government that had pushed the country into economic stagnation, causing soaring unemployment. Despite the reservations many may have had with the SLD, at this time it was able to present itself as the party most likely to improve the living standards of working people and the poor. In 2001 it won over 40% of the vote and went on to form its second coalition government with the Peasants’ Party.     Read further.......