In recent days there has been a lot of controversy after a BBC documentary reported the level of racism in football in Poland and Ukraine, who are hosting the EURO2012 football championship this month.

Racism and anti-semitism in Poland and Ukraine have been a problem for many years. The documentary showed the extent of this problem in many stadiums. However, it is not the case in Poland that racism exits in all stadiums and by all fans. I know for example, that the journalists making the documentary visited the stadium of Warsaw's second club Polonia Warszawa and found no examples of racism. They chose to leave this out of the film however, probably due to the fact that it was not newsworthy.

One of the problems I have with films like this is that it shows Eastern Europe as being a backwater where racism is rife, compared to the civilised West which is more advanced. Now, it is true that in stadiums in Britain for example you would be unlikely to hear racist chants nowadays, which is completely different to when I was growing up when I remember commonly hearing racist chants. This does not mean that racism no longer exists amongst football fans in England. The fact that one of the most active far right groups in England at the moment - the English Defence League - is connected to organised football hooligans shows this.

There is nevertheless a particular problem in countries such as Ukraine and Poland and hopefully the policy of zero-tolerance will be enforced during the tournament and beyond. Anti-racist campaigners have long been campaigning against racism in football here and have organised a number of events to encourage diversity and tolerance at EURO2012.

Below I reproduce an article that has been published in the Guardian this week by Remi Adekoya, a Nigerian born journalist living and working in Poland:

As European nations gear up for Euro 2012, the spotlight is turning to one of the host nations and its attitudes to foreigners. England winger Theo Walcott's brother has tweeted that he and his father won't be travelling to the tournament, due to fears over racist abuse. Earlier this month, the BBC ran a long report on racism in Polish football and, according to the Daily Mail, the Foreign Office has warned England fans to "expect racist attacks in Poland and Ukraine". Read more......

A very informative article by Yordan Dimitrov on youth unemployment in Bulgaria has been posted on the Social Europe website:

This is a brief presentation of the latest developments of youth unemployment in Bulgaria. It aims to address whether or not the recent trends are a continuation of the impacts of the economic crisis on youth participation in labour markets. The only data used is from the Bulgarian National Statistics Institute Labor Force Survey (NSI LFS) and targets the 15-24 age group. Read more........

Below is a translation of an open letter that has been published in protest at the growing campaign against trade unions in Poland. We the undersigned wish to express our support for recent protests organised by the “Solidarity” trade union and other organisations which have taken steps to oppose our government’s anti-social and illegitimate “pension reforms”.

Recently we have witnessed an intense heating up of anti-trade union activities. Various public figures have openly condemned the Solidarity trade union for its campaign against raising the age of retirement and in particular its decision to blockade the parliament building during a debate on this matter. Read more.... 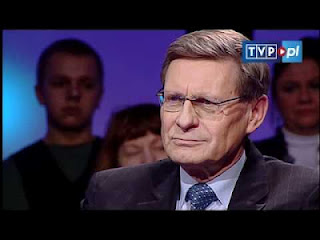 Leszek Balcerowicz appeared last night on the political chat show hosted by Tomasz Lis, where he repeated his long-held mantra that only further liberalisation and austerity could ensure Poland's long-term economic success.

In the interview Balcerowicz repeated two old myths, that are used to show that there really is no alternative to the policies of economic liberalism:

- Firstly he argued that one of the biggest threats to the Polish economy is its high level of public debt (presently around 54% of GDP) and budget deficit (over 7%). He explained that 'despite' Poland's positive economic growth over the past few years, its deficits and debt have continued to grow.

Perhaps we could turn this around, and state that Poland has grown because it has allowed some expansion of its debts/deficits? These are still way below the European average, and the ticking of a debt time-bomb sounds loudest in the heads of those who are focused almost entirely on this one aspect of economic policy. During the past few years public investment has risen from 4.2% of GDP to 5.6% and the government has avoided an all out policy of austerity (much to the disgust of Balcerowicz) similar to that being pursued in other European countries.

With Balcerowicz ruling out any return to more progressive taxation policies in Poland, his anti-deficit programme relies almost entirely upon cutting public and social spending. This policy would lead to social and economic regression, not development.

- The second myth being spread by Balcerowicz is that if the country does not act fast and decisively, then the bond-markets will punish Poland and the cost of its borrowing and thus overall level of debt will rise. The assumption is that bond-markets reward public spending cuts and punish over-spending. However, when we move away from the text-books of dogma, we find that this is actually not the case. For example in France since the election of Francois Hollande, bond yields have actually fallen; as they have in Germany that itself has diverged from the policies of austerity. In contrast the GIPS economies (Greece, Ireland, Italy, Portugal and Spain) the bond markets have fallen (causing their interest rates to raise) after introducing harsh austerity programmes.

A programme of austerity in Poland would most likely lead to an economic contraction that in turn would see the country's bond markets decline.

For more on the bond markets in Europe, see this interesting article from Socialist Economic Bulletin.
Posted by Gavin Rae at 00:54 3 comments: 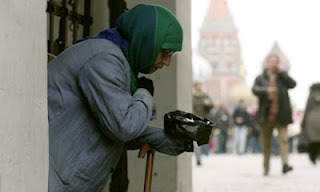 A thought provoking piece by Neil Clark in the Guardian:

I wonder if David Cameron spent any time in eastern Europe in the 1990s.Judging from his recent remarks about the Arab spring and international aid, the British prime minister seems to believe that having a more "open" and "free", ie privately owned, economy is the key to both economic development and a successful transition from one-party rule.

The evidence from the former communist countries gives lie to that neoliberal viewpoint. In a recent study entitled Mass Privatisation, State Capacity, and Economic Growth in Post-Communist Countries, published in American Sociological Review, sociologists from the universities of Cambridge and Harvard claim to have established a "direct link" between the mass privatisation programmes followed by around half the countries of the region – enthusiastically urged upon them by western economists and western financial institutions – and the "economic failure and corruption that followed". The more closely the countries followed western advice, and the more they privatised, the worse things became.

Lech Wałęsa - Trade Unionists Should Be Beaten with Truncheons 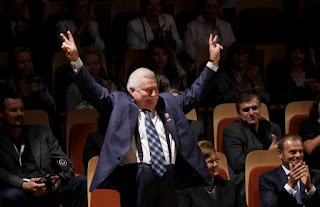 Lech Wałęsa is of course most famous for being leader of the Solidarność movement in the 1980s. The man who stood up to the Communist authorities, led a social movement that claimed 10 million members and eventually paved the way for the end of the Communist system in Poland.

Despite his CV Wałęsa has shown that he no longer even pretends to stand on the side of working people. Whilst the MPs in Poland's parliament last Friday voted for raising the retirement age to 67, members of the Solidarność trade union demonstrated outside and for sometime attempted to block MPs from leaving the building.

Perhaps this was not the most elegant way to behave, but then pushing through a bill that is opposed by around 80% of society and which the trade unionists had collected over 1m signatures calling for a referendum is hardly the height of political decorum.

Now ok, Wałęsa is Wałęsa. He is a long way from being the young electrician that jumped on the wall at the Gdańsk shipyard. He has since been a poor President who helped usher in the shock-therapy reforms and then suffered a series of election defeats in the 1990s. But still! The demonisation of trade unionists - protesting against the issue of raising the retirement age - has reached new heights.

Unfortunately Janusz Palikot, who had previously been presenting himself as the new leader of the left, has joined in on this. On his blog he argued that the trade unionists had been violent and that they wre drunk.  Palikot has shown that by voting for the raising of the retirement age  he does not stand on the side of working people. In order to justify this he has to join the chorus of derision directed at these trade unionists. How long before he too will want the police to beat them?
Posted by Gavin Rae at 11:04 1 comment: 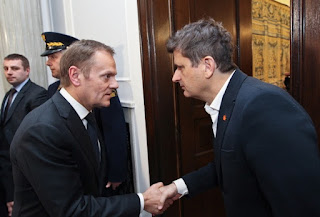 A bill to raise the age of retirment to 67 was passed in the Polish parliament today. 268 MPs voted in favour, 185 against, with one abstension.

Outside the parliament building members of the Solidarność trade union confederation held a protest. As I write they are blockading the entrance in order to prevent MPs - who are presently debating the issue of removing pension privilleges for uniformed workers - from leaving the building. Despite this the demonstration of trade unionists was relatively small and unlike the large demonstration at the end of March only included one of the three major national trade unions. The trade unionists were also not joined by other demonstrators from Warsaw, underlining a continual problem of the trade unions failing to reach out beyond its own ranks, even on issues which the vast majority of society are in agreement with them.

The bill to raise the age of retirement was opposed by the main opposition party the Law and Justice Party (PiS) and the Democratic Left Alliance (SLD). Once again the Palikot Movement (RP), who ostensibly are challenging the SLD to be the major party of the left in Poland, voted with the governing coalition. This is the second time in two days that RP have voted with the government in parliament, after opposing the resolution put forward by PiS yesterday that, in line with the country's constitution, any ratification of the EU's Fiscal Pact would have to be backed by at least 2/3 of MPs. The resolution was defeated, with the SLD abstaining in the vote. 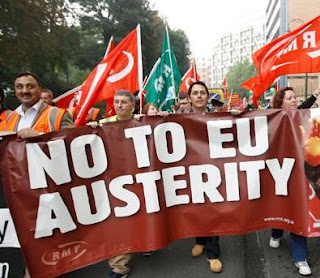 Marching in the May Day Sunshine 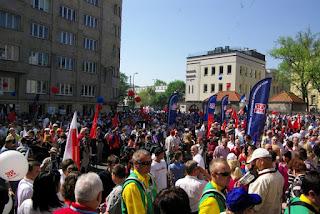