Polish Railways - The Failure of Deregulation 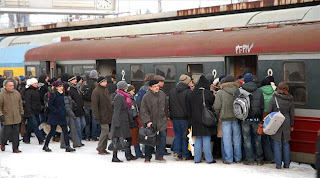 As I spent my Christmas in the UK this year, my TV viewing was largely taken up watching the private monopoly - Heathrow Airport - completely fail to deal with snowfall in December. If I had chosen to stay in Poland during the festive period, I would have been watching another transport disaster unfold.

In the run up to Christmas thousands of passengers were stranded for hours in trains or waiting in stations in freezing conditions. The immediate blame for the chaos was put on the sub-zero temperatures and heavy snow throughout the country. And yes the weather was extreme but we're talking about Poland in December here! The second direct cause was the introduction of a new schedule, that seemed to create not just total disorder on the network itself but lead to a complete breakdown in communication, with passengers unable to obtain information about when and where trains would be running.

As a result of this disorder heads rolled, with the President of the Polish Railways (PKP), Andrzej Wach, and Deputy Infrastructure Minister, Juliusz Engelhardt, losing their jobs. It is politically significant that Engelhardt was fired and not the Minister of Infrastructure Cezary Grabarczyk. A motion placed in parliament by the opposition SLD, calling for Grabarczyk to be dismissed, has been rejected. Grabarczyk is one of PM Donald Tusk's closest political allies, both in the government and inside the ruling party PO, while Engelhardt is a member of the minority coalition party PSL.

These latest events have not been caused by a combination of unfortunate coincidences or even poor management by those presently in control. Rather they are a culmination of sustained underinvestment and the results of de-regulation and the break up of a centralised managed railway system.

In 2001, the AWS-UW government (yes those lot again!) radically reformed the Polish railways. The major change of this reform was the creation of a series of companies to replace the single company PKP. These companies were formed to run different parts of the railways in different regions of the country. This reform was obviously ideologically led, intended to create more competition within the railways and pave the way towards privatisation. The result has been spiralling costs, as these companies compete for funds and charge each other for their services, and an industry that is in conflict internally and incapable of coordinating its work.

Simultaneously the Polish trains have been continuously neglected and underfunded by successive governments. There are over 19,000 km of railway track in Poland, the third largest in the whole of the EU. However, while only and average of 4,000 euro is spent annually on 1km of track in Poland, 20,000 is spent in the Czech Republic, 130,000 in Germany and 400,000 in Holland. Unfortunately the situation has hardly improved since Poland entered the EU. While the country has managed to invest significantly on roads and stadiums it has completely failed to do the same on the railways. Although some investments on the railways have been carried out using money available from the EU budget for 2004-06, the Polish government is yet submit any proposal to Brussels for money for railways out of the 2007-13 budget.

It has been a depressing sight to see the steady decline of the Polish railways. Previously, although they were often dirty and the stations unkept, the trains ran efficiently and the price of tickets was reasonable. The government has favoured roads over railways and let an important public service, upon which millions of people - particularly the least well off and those living in the countryside - rely. This is also hugely short sighted economically. A well developed railway service is not just important socially and environmentally but is also beneficial to the economy and helps to attract investment into the country. Proper investment in the railways would therefore bring long-term returns to the Polish economy and thus the government. An efficient and well run railway service can also become profitable and partly self-financiing. For example, the German railways have an annual income of 30bn euro, which alongside state subsidies and ticket sales helps to fund investments in the network.

Of course as the state system has been run-down and broken up, and the service has consequently detiorated, calls for its privatisation have grown louder. The argument runs that private business would invest more in the railways and manage them better. However, there is no basis for this thinking either in practice or in theory. Private businesses will only invest in the railways if they think they are able to gain a profit from this investment. Naturally, therefore, they will only want to buy those parts of the network that are at least potentially profitable. This would mean buying up the most desirable parts of the service and leaving the rest to the national and local government. This would undoubtedly lead to many local and regional lines being shut down, while the private sector builds its 'flagship' projects, targeted at the large cities and better off in society.

Anyone who remembers the disaster of the attempt to de-regulate and privatise the British railways, which included an increase in fatal accidents, will be fearful of such an outcome.