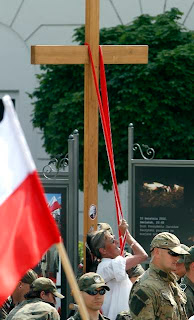 Two social groups face each other. They find no mutual recognition, no common language, no room for compromise or discussion – they are in total opposition. Their language, ideas, morals and lifestyles revolt the other whom they sneer at, mock and degrade. They blame their adversaries for their own frustrations, limitations and fears.

Anyone who has visited the Presidential Palace in Warsaw during the past couple of weeks will have witnessed such a scene.In front stands a group of protesters who oppose the removal of the cross raised by Scouts after the Smoleńsk tragedy in April (for more details on this in English see here and here.) They see this as an affront to the Polish nation and Catholicism. Many of them believe that the Smoleńsk tragedy was a deliberate attack organised by Russia in cohort with sections of the Polish elite. Their ideas are drawn from Poland's long and often tragic history of war, occupation and partition. Yet they also feed upon the social alienation and exclusion of large sections of society in contemporary Poland and the inequalities and injustices that it has spawned. Despite their small numbers these protestors have so far prevented a weak and indecisive establishment from removing the cross.

In opposition another group of protestors has emerged. This is mainly drawn from the young, urban milieu. They do not derive their identity from the past and do not want their country to be defined by historical conflict and the overbearing dominance of the Catholic Church. They are culturally open, forward looking and hope for Poland to take its place at the centre of Europe with a developed economy and modern society. Counter-demonstrations have been organised and some are claiming that a new social movement is being born, seeking to push Poland forward towards a full separation of the Church from the State, removing crosses from all schools and public buildings and supporting reforms such as the state funding of in-vitro treatment.

This cultural conflict is being driven by immediate political concerns. After presenting themselves as the party of reason and moderation during the Presidential elections, the Law and Justice Party (PiS), and its leader Jarosław Kaczyński, have returned to form. Kaczyński is determined to establish the martyrdom of his brother Lech Kaczyński and create a symbol around which the Conservative-Nationalist right can unite. This involves opposing the Russian led investigation into the Smoleńsk tragedy and trying to create a new historical myth of external aggression and internal betrayal.

The problem facing PiS is that this is not a strategy for political success. It may appeal to the party's core conservative base but it all but removes the possibility of PiS challenging Citizen Platform's (PO) current monopoly of political power. Already the hierarchy of the Catholic Church have distanced itself from the protests, seeing them spiral out of its control and fearing that they may unleash a new social movement for secularism in the country. The success of PiS in previous elections was rooted in its ability to unite a number of ideological currents through claiming to represent the interests of the poorer sections of society and putting forward a programme of cleansing a corrupt political system that was supposed to underlie these injustices. The present political trajectory of Kaczyński is already causing some disconcertion amongst the party's ranks as it threatens further political isolation.

And what about PO? On the one hand, the current conflict is another political gift from the opposition. It diverts attention from the government's own potential problems – not least the emerging budget crisis – and increases the likelihood of many returning to support PO simply because it is not PiS. PO most closely represents the wishes of the economic elite at this juncture and better represents the sort of society needed for a functioning contemporary capitalist economy. PO is also moving closer to the hierarchy of the Catholic Church as the latter comes to realize that it may be better to accept the status quo than risk its own already privileged position. The problem facing PO is that many of its young urban electorate may want to go beyond this brand of 'moderate' conservatism. If PO were to take up many of their demands, such as removing crosses from schools, then it could unleash divisions between its conservative and liberal wings and threaten its own internal unity.

The one party that expresses a clear secular and culturally liberal position in Polish politics is the Democratic Left Alliance (SLD). The SLD's leader Grzegorz Napieralski has wasted no time in expressing his support for further secular reform in Poland. It is feasible that the SLD could gain the support of many who have been galvanized by current events. The SLD has largely built its identity through opposition to the clericalisation of Polish society and politics. While the Polish left has generally failed to coherently oppose the neo-liberal reforms of the transition from state-socialism, it has at least managed to express its opposition to the growing influence of the Catholic Church in public life (although it made large compromises when in government.)

The danger for the left is that it overplays this card. It is right for Napieralski to express his support for Poland's cultural and social policies coming more into line with the European mainstream and for a full separation of the Church and State. However, the left has to find a way of uniting different social sectors, often with conflicting social outlooks. Polish society is not neatly divided into two camps of 'liberals and conservatives' or 'progressives and reactionaries'. There are millions of people in Polish society who would not agree with the extreme views of the protestors outside the Presidential Palace yet at the same time would not identify themselves with the counterdemonstrators. For the vast majority of primary importance is not, for example, whether a cross hangs in a school but whether that school provides their child with a decent education or not. Bringing such needs together is the key to creating a real progressive majority in Poland.